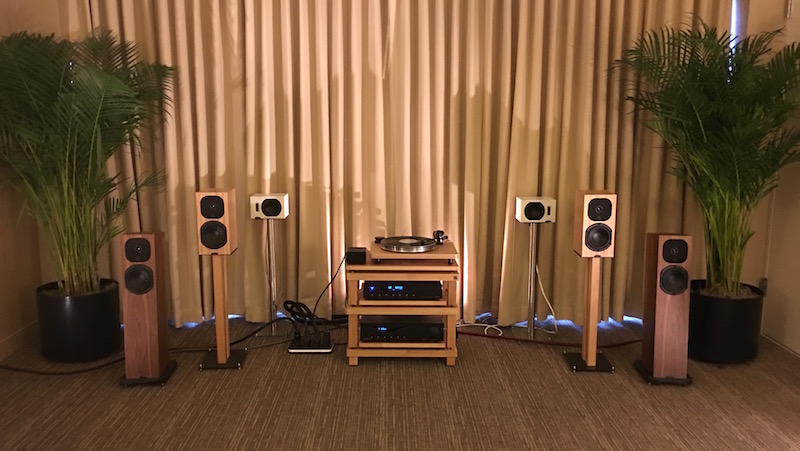 High Fidelity Services’ second room headlined Neat Acoustics Motive SX2 loudspeakers ($2395/pair), which, if I’ve got my facts straight, were inspired by the BBC LS3/5A model and offer a lot of placement flexibility. This pair staged quite well, and excelled with both The Rolling Stones’ “Love in Vain” and a very different recording of Piazzolla’s Oblivion on Yarlung Records’ CD, Antonio Lysy at the Broad. Yes, there was some booming on the bottom—this was a hotel, after all—but the overall presentation sounded beautiful and listenable on both tracks.

Analogueworks is a new U.K. based turntable company founded by former associates of the late Tom Fletcher, whose company Nottingham Analogue is still in business. Another Fletcher associate, Peter Mezek, builds turntables under the Pear Audio name that bear an even closer familial resemblance.

The company’s products made their North American audio show debut at AXPONA 2016. Read the full review and watch video coverage.

The premiere of an Analogueworks TT OneTwelve turntable ($3795) with Ortofon TA210 tonearm ($1994) and Ortofon Cadenza Black cartridge ($2729) in the High Fidelity Services room highlighted a system that also included Audia Flight FL Two integrated amp ($5495), FL Phono phono preamp ($6295) and CD One M CD player ($7695); Verity Audio Leonore loudspeakers in oiled walnut ($18,145); Unity/Ortofon, Vibex, and Vibex/Unity cabling; and Custom Design Definitive rack ($1595). The sound on Reference Recordings’ Il Trittico had a bit of a gunmetal coloration that I associate with some solid-state equipment, and that clearly appeals to others more than to me—it’s what makes life so interesting, folks—but the system had no trouble whatsoever playing at high volume with ease.